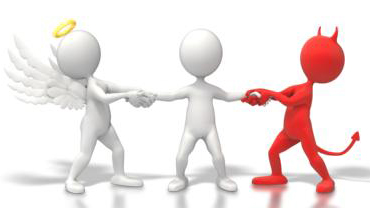 7 Ways To Know Yourself

The most absurd thing I have discovered is that an overwhelming number of people hate themselves.

They actually make the choices and do the things that cause them harm.

I’ve identified the following as characteristics of those who love versus those who hate themselves.

People who hate themselves usually:

1) Have a very important, and loudly articulated, need to be genuine.

2) The barometer of their being genuine arises from their feelings. When they act according to how they feel they think they are genuine. So if they feel hurt, they tend to nurse this feeling and behave and respond out of this hurt. They may delay their reaction but remain dissatisfied until they display, act, or thrash out exactly as they feel.

3) They usually know how they are right and why others are wrong.

4) They see themselves as being perfect in their own eyes, and in the eyes of others. They tend to violently or accusatorily do that which is needed to rectify the impression/image that they (or those who are in their care) are in some way imperfect.

5) Fundamental courtesies elude their daily life – especially to those they have identified themselves as being superior to. (They are superbly courteous in contrast with those they seek to make an impression with)

6) They may easily accept their weaknesses but refuse to seek the help from those around them who could assist them. They have a need to appear stronger than they are.

7) Its usually easier for them to leap up to the moon, than apologise and make the first forays of reconciliation.

In contrast people who love themselves seem to:

1) Have a very important, and articulated, need to be genuine.

2) The barometer of their being genuine arises from their alignment to the role and responsibility they hold – regardless of their feelings, that causes them internal hurt.

3) They are usually contemplative and seek out their own flaws doing whatever is necessary and spending what money and time is needed to iron out these flaws.

4) They seek perfection constantly and continually yet rarely see themselves as perfect and accept that others would have good cause to find fault with them.

5) In reality though these have perfected courtesy. They make the effort regardless of occasion, age, and financial/social status to both acknowledge and display gratitude. -The best leaders have perfected the art of responding to e-mail or other digital communication within 24 hours.

6) They tend to impose their wills on themselves rather than continually trying to freely impose it on others through non-stop suggestions, instructions or criticisms.

7) Regardless of who is right or wrong they are usually first of the block to initiate reconciliation.

Money seems to come to both types of people. You don’t really need to be of this or that type to make money.

What is clear is that you need to love yourself before you can be your best and receive the fullness of your potential.

Happiness doesn’t seem to come to both; nor joy, or peace.

Those who hate self confuse fun and pleasure with happiness, peace and joy. As a result they seek continual distraction and entertainment and live moment-to-moment, victims of their inner moods. Always alert for that next experience.

Fundamentally the difference between the two is this. One will make all the noises needed to display dissatisfaction with the status quo but never make the willful and sustained effort needed to change.

They are self-satisfied they way they are, and remain so.

The other chases the aspirational and the ‘ideal’ being ceaselessly – never resting on laurels or previously produced comforts.

They are happy working at themselves and their lives.

It’s a choice we make daily. We are never compelled to be this or the other. I have a theory on why we make the choices we make too, but that another time.

Of course there are many other characteristics and this is not comprehensive in anyway.

Fits of rage, complaining, accusing all arise from men who hate themselves.

I believe that we are all created to be beneficiaries of love. Yet sadly, too many in the most sophisticated and moneyed environments bear the misery of hatred.

Hate yourself and find obstacles at every turn.

Love yourself and find a life that works in your favour.

Be someone Happy The saddest thing I’ve found in my work is that people experiencing genuine misery refuse to acknowledge being unhappy. Very much like an overweight person is often unable to see that s/he is overweight

The one who loves self is able to acknowledge being unhappy and ascribing the cause for it as being internal and not external, rectifies and resolves – develops and grows internally as needed- to remain happy.

May you remain aspirational, purposeful and fulfilled…not wishful, whining and miserable.